Frontline Commando Force Fight is a combo of multiple Military Assault Shooting game including the thrilling war game, Army Action game, multiplayer fps shooting games, FPS Shooting games and frontline pvp battle games. What can be more interesting, no rules of battle, unlimited Terrorist Sniper shoot at enemy forces, thrilling terrorist hunting, and leading the team into Mission IGI Battle as a Cover Strike Commando. The enemy is brave and strong, he is missing no chance to attack you from hideouts so you as a war strike commando have to be very careful. You have been appointed to crush the dark forces. The Special Forces have joined hands with you in this Critical Strike mission. Frontline Army Commando have to come up with Shooting Counter instincts and deadly war strategy for the survival.

Frontline Commando Force Fight gives you the live experience of Military Commando shooting, Critical Sniper Shooting, Army FPS Shooting and Us Modern Shooting. You will be trained as an Army Sniper Shooter under the supervision of frontline shooting commando and Critical Army Sniper. Your ultimate responsibility is to become an Evil Hunter, lead the elite military force into front-line action, carry out a shooting strike gun war, cover shooting fire, kill the Enemy Army Troopers and shoot the opponent sniper soldiers. On Call of commando, you have to carry out Critical Attack at enemy’s hideouts. You will be accompanied by the WW2 Super Solider in this Special Forces Commando Ops.

Frontline Commando Force Fight is the best Air Force Shooter 3D game, where you will experience the Modern Shooting Arena war and epic tactical battle. Beware of the enemy and follow the Rules of Arena Survival as well as they are equipped with deadly Assassin Weapons and Assault Rifles to fight in the Battlefield. Leading the Combat Commando frontline, you as a Warrior have to make Glorious Resolve to win this Journey to peace by defining the Rules of modern world war, during this Assault Shooting Arena.
Frontline strike survival is never easy but a true warrior never looks for the easy path. It is your free global war duty to eliminate the dark forces and evil from your country. 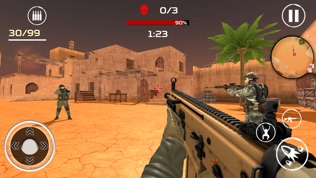